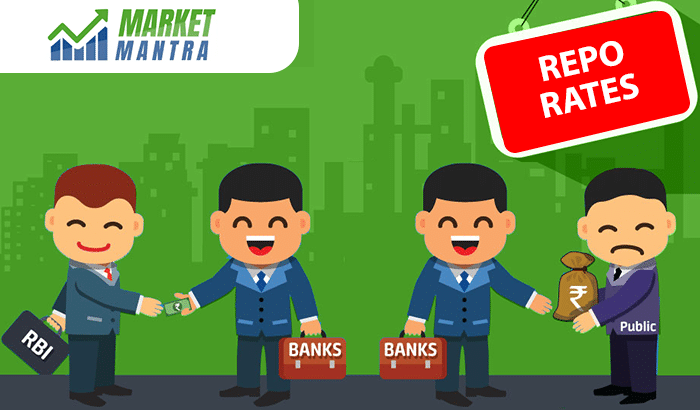 What is Repo Rate?

Repo rate is the rate at which the central bank of a country (Reserve Bank of India in case of India) lends money to commercial banks in the event of any shortfall of funds. Repo rate is used by monetary authorities to control inflation.

At the time of inflation central banks increase repo rate as this acts as a disincentive for banks to borrow from the central bank. This reduces the money supply in economy helps in controlling inflation.

How does repo rate work?

When someone borrow money from the bank, this lending of money attracts some amount of tax on the principal amount. Similarly banks borrows money from Central Bank (i.e., RBI in India) during less cash inflow, on which they have to pay interest on it. This is termed as Repo Rate.

The components of repo rate transaction between Central bank (RBI) and banks are as follows:

Repo rate are important and powerful arm of the Indian monetary policy that is responsible for regulation of country’s money supply, inflation levels, and liquidity (Cash Flow).

During the inflation time, Central bank (RBI) makes some hard attempts to bring down flow of money in economy. For doing this Central bank have to increase the Repo Rate.

When RBI wants to flow Cash into system:

When Central Bank (RBI) needs to increase the flow of the cash into the economy it lowers the Repo Rate.

What is Reverse Repo Rate cut?

How does reverse repo rate work?

It has an inverse relation with the money in the economy.

Following are the components of the reverse repo transaction:

When there is a hike in reverse repo rate, banks can earn higher on their money which is deposited in RBI (Reserve Bank of India). This is the best way for safer investments for the banks so the overall flow of the money into market will decrease as more bank’s surplus funds are deposited with Reserve Bank of India (RBI) instead of being lent out.

This leads the banks to invest more money in more lucrative avenues such as money markets which increases the overall liquidity available in the economy. While this can also lead to lower interest rate on loans for the bank’s customers.

The decision will depend on multiple factors including the bank’s internal liquidity situation and the availability of other potentially less risky and equally lucrative investment opportunities.

Power of Compounding & why choose compounding?
What is stock market and how it works?